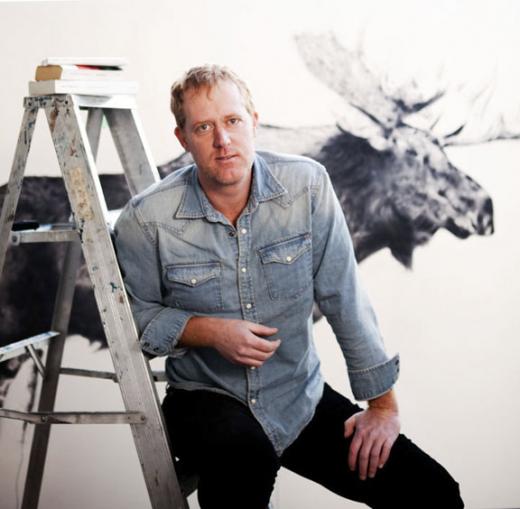 Quebec artist, writer and filmmaker, Marc Séguin was born in Ottawa on March 20, 1970. He graduated from Concordia University in 1995 with a bachelor's degree in visual arts and he now lives in Montreal and New York. Since his first individual exhibition in 1996, Séguin has participated in several group and individual exhibitions in Canada, as well as internationally.
In 1997, his work was recognized by the curators of the Musée d'art contemporain de Montréal when it was included in the now famous exhibition De fougue et de passion. He was invited there again in 2000 to show a personal exhibition of a series of large paintings on the theme of the medieval rose window. In 2001 and 2003, the exhibition was shown again, this time in Paris, then in several Canadian cities.
A prominent figure in the contemporary artistic landscape, Marc Séguin is a gifted engraver as well as a prolific painter. Inspired by current events, he mixes abstraction and figuration to create unique large-scale works. The themes, treated from the angle of social criticism, revolve around destruction, life, and death.
To date, Marc Séguin has held more than twenty personal exhibitions in addition to partaking in as many group exhibitions and international fairs around the world.