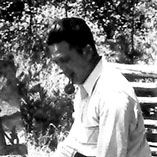 Albert Rousseau, painter, printmaker, animator at
St-Étienne-de-Lauzon, Qué 17 Oct 1908; d 18 Mar 1982). A prolific artist whose reputation grew during the 1970s along with that of his friend René RICHARD, he studied at the École des beaux-arts and soon saw his artistic ambitions curbed by the depression of the 1930s. He had to give his family's needs priority, working in a hostelry until 1965, meanwhile arranging to continue to paint regularly with such friends as Marc-Aurèle FORTIN and to show his works in Québec and Montréal. In 1956 he built a studio where his colleagues came to paint. He taught at various Québec institutions 1964-67, and his painting was stimulated by frequent trips to both the Canadian and American Atlantic seashores. In 1964 he organized a first rural exhibition near his studio, and since 1971 these exhibitions have become the annual festival of the Moulin des arts de St-Étienne, which Rousseau saved from demolition and transformed into an arts studio that draws some 200 artists and thousands of admirers each season.