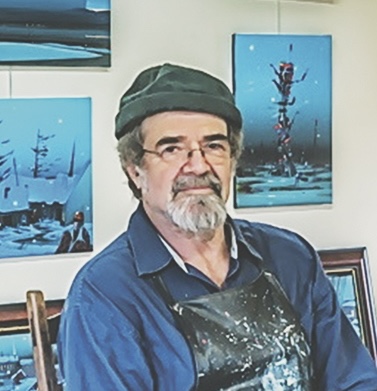 Born in Montreal in 1944, André studied at l’Institut des Arts Graphiques from 1963-65, and then followed advanced courses at L’École des Beaux-Arts de Montréal. In 1966, he visited the great museums of Europe and returned for a four-month journey in 1984. He held his first solo exhibition in Montréal in 1968 and in 1970 published the first Quebecois cartoon book “Oror 70“. He received a Canada Council Arts grant in 1969-70, taught graphic arts at CEGEP Ahuntsic in 1971-72, then left the city to settle in Chartierville, in the Eastern Townships. After some years without painting, he returned to work with landscapes, seen around in his new surroundings. In 1983, he received First Prize and the prix René-Huyghes at Sherbrooke’s Salon International de la peinture.

For André Philibert, the nocturnal winter landscapes are the pretext for skillful chromatic studies where the dominant tonality, dark blue, assumes different values according to whether he desires the scene to be cool or warm. As for winter, this painter achieves serene images from along the shore of Saint Lawrence and in the back country. For him the human presence is a primordial element which dominates each painting rather through the use of a symbol, a lamp light glimmering in the night than in the physical depiction of individuals. Perhaps he conjures a world that is propitious for a ghost or one that is, nonetheless well anchored in reality.

André Philibert has been called the “Painter of the Night” by many critics but it would be more accurate to describe him as a painter of the full moon, of the sunrise and the sunset, or maybe even as a magician. His work depicts another reality, all enveloped in blue, but so real that the viewer forgets his own. These numerous scenes of a Quebec winter, with everything under snow, make us feel good and remind us of childhood. The luminosity of his landscape creates a night atmosphere of calm and quiet.

Philibert’s work is refreshing, contemporary by the geometry of its forms, and unique because of his mastery of technique. A graphic artist by training, André Philibert has taken part in numerous exhibitions, solo and group. His work can be found in Europe, the United States and in Canada.