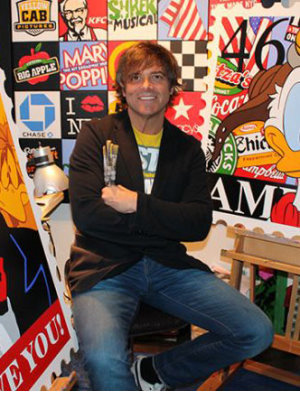 Born in Sept-Îles, he chose Montréal as his place of residency. A well-established artistic career of over 25 years ensued- filled with success in Canada, the United States and Europe.
Boudro, when on a voyage to New York in the 80 s chose a style at the opposite of the spectrum from his early landscapes of the Charlevoix region. His works which would propel to the forefront were the images of Time Square and New York s famous yellow taxis. His influences include Andy Warhol, Keith Haring, Roy Lichtenstein among others; he used their innovations in the Pop Art movement to make as it were his mark using pieces of a puzzle, stamps and records. Humour and Organization of chaos intertwined to produce works publicity as well as comic characters.
He would seem to mold the urban life in structures both original and grandiose. Among his most noteworthy works can be found in the Air France lounge at JFK AIRPORT IN New York as well as at the 911 memorial.
What determines his choice of colour is conditioned by a of colours. If he wants green, he will use the green of Starbuck s or 7 up; if it is yellow-Mr. Peanut is the order of the day. He balances his work with these codes- ‘What guides certain advertisements, I use to balance my creations.” His primary medium is acrylic paint to which he juxtaposes collages and then redesigns and discards certain elements to achieve balance and harmony. The very minute details of his art would suggest a computer-generated approach, but all is done by hand.
Boudro demonstrates the rapidity of change in his time, his art in his words reflects a Society of mass consumerism.