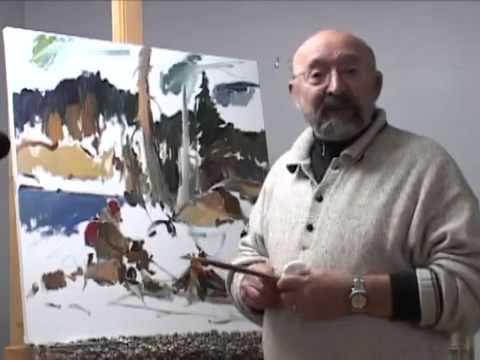 Serge Brunoni was born in 1938 in Ligny-en-Barrois, France. When he was only 14, he was forced to leave school to go work in a factory. Between the age of 20 and 23, he did his military service in French Equatorial Africa. When he came back to Paris, he missed the vast landscapes of Africa and decided to leave France for Canada. He settled in Trois-Rivières in 1963, where he still resides today.

Self-taught, Brunoni has been drawn towards painting since his early days, though he painted his first piece in 1970. His first solo exhibition was held in 1976 and was a great success. Critiques and historians have described him as an artist who brought a European touch to the art of Québec. He is known for his richly coloured landscapes, his scenes depicting hunting and fishing and his lively cities. For Brunoni, communication between his art and his viewer is more important than the technique itself. He does not strive for perfection, but rather to create paintings that can transmit emotions to their viewers. For him, creation is the most rewarding experience. His work is part of numerous public and private collection.