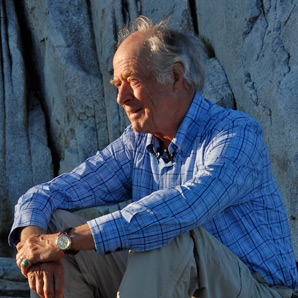 Born in 1937, Horace Champagne began his career in commercial art and publicity.
In 1980, at the age of 42, he decided to turn over a new leaf and went to Western Canada, bringing with him 20 of his pastel pieces, hoping to sell them in galeries in Calgary or Vancouver. When he arrived in Calgary, he met Peter Ohler Sr., the owner of Master Gallery, who bought his 20 pieces. Three weeks later, they were all sold. He commissioned 35 new ones and later, 100 pieces. To this day, Horace Champagne still exhibits at Master Gallery.

Later on, Champagne went to study Art at the Montreal Academy of Fine Arts, the Ottawa School of Art and in North Salem, New York. He studied landscapes and live models among others.
Horace Champagne is a lover of nature and fishing and he depicts picturesque landscapes reflecting all the four seasons.

He sets up is studio for good in Île d’Orléans, Québec, where he works surrounded by the beauty of the island. He also travels a lot and always brings back inspiration for his work. He frequently travels to Europe, mainly Italy, where he studies the work of the grand masters of the past. Every year he visits the Canadian Rockies to admire the breathtaking landscapes. His depictions of Old Québec and other villages demonstrate his mastery. He bears the title of Pastel Master of the Eastern Canada Pastel Society.