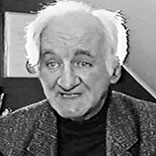 After studying at the School of Fine Arts, he studied at the New School of Research. With a scholarship from the French government, he spent two years in Paris and enrolled at the National School of Beaux-Arts and the Ecole du Louvre. He was the director of exhibitions at the Museum of Québec, then the East Side Representative of the National Gallery of Canada, and he represented Canada at the Commonwealth Institute in London. In 1979 he exhibited his works in London. He also exhibited in Paris, Madrid, and Dusseldorf. His work is in many public and private collections including the National Gallery of Canada, the Quebec Museum, the National Bank of Canada, Lines and Travel insurance in Zurich, and in Switzerland and several embassies of Canada.

1st prize in drawing and painting (1941-1946) at the provincial exhibition of Québec, 1st prize at the Museum of Fine Arts in Montreal in 1956, 1st Canadian artist to receive a scholarship from the Salvador Dali foundation from the University Bryn Mawr in Pennsylvania in 1958. In 1960, he became a member of the Royal Academy for the Arts (Associate Member in 1973) and represented Canada at the Second International Biennial in Paris in 1962.