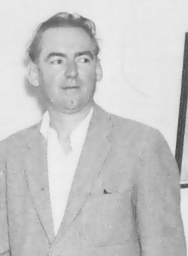 Jean-Philippe Dallaire created his own world in which reality and fiction are mixed together. The very particular people in his artworks are sometimes strange looking, even morbid despite a festive theme easy recognizable in most of his pieces.

The first drawings Dallaire makes are around his 11 years old. Even if he took part into few formations in Toronto, Boston and Montreal, he is considerate by art historian as a self-made artist. In 1938, he wins a grant that permits him to move in Paris, where he attends the Atelier d’art sacré and l’Hôte, owning his workshop at Montmartre as well. He discovers the works of Picasso and the Surrealists and of the Quebecer Alfred Pellan. Arrested by the Gestapo in 1940, he is incarcerated during four years, coming back to Canada in 1945. From then, he teaches painting at the École des Beaux-Arts in Quebec City until 1952 and works in Ottawa at the Office du film until 1957. At the end of his life, Dallaire goes back in France and live in Vence until his death in 1965.