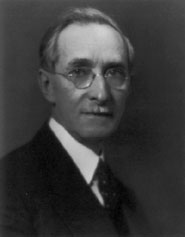 Frederick S. Coburn was born in Upper Melbourne in 1871. He has know an illustrious career both as a painter and as an illustrator and is known for his landscapes, still-life paintings and his drawings. He first studied at the Council of arts and manufacture of Montreal in 1887 and 1888 and at the Carl Hecker School of Art in New York in 1889 before going to Europe on the following year, where he stayed until 1916. He then studied at the Berlin Academy, at the Academy of Fine Arts in Paris and in various places in London and in Belgium, all to perfect his artistic techniques. In Anvers, Belgium, he met his future wife, artist Malvina Scheepers, with whom he would later establish a studio in his hometown, Upper Melbourne. Coburn gained renown as an illustrator notably for his work illustrating Canadian poet W.H. Drummond’s The Habitant. After that, his drawings where used to illustrate the works of numerous American, English and Canadians authors such as Louis-Honoré Fréchette, Washington Irving, Charles Dickens, Edgar Allan Poe and Alfred Lord Tennyson for the New-York based company G.P. Putnam.
However, Coburn is known mainly for his Canadian winter landscape scenes which star horses and sleighs. These scenes have given him unprecedented renown for a Canadian painter. The artist has a unique way of depicting winter, with luminous cloudy skies. The term ‘Coburn Sky’ comes from his technique. The imagery from his scenes typically show horses carrying sleighs full of logs through snowy forests or sunny country roads. These scenes contrast with his earlier works, which were a lot darker. From 1900, the artist started incorporating in his works the techniques he acquired in Europe, adapting them to his own style. He started focusing on floral subjects and spring landscapes from the Eastern Townships of Québec, inspired by his friend and mentor Maurice Cullen and by his love for the Canadian winter. In 1928, at the age of 57, Coburn is elected a member of the Canadian Royal Academy of Arts.
The most important collection of Coburn’s works is exhibited at the Sherbrooke Museum of Fine Arts in Québec. His paintings can also be seen in galleries, museums and temporary exhibits throughout Canada and around the world.