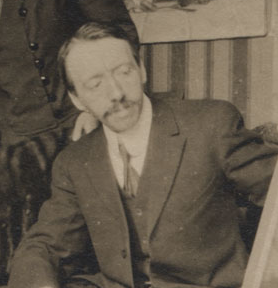 Edmond LeMoine was born in 1877 in Québec and died in 1922. He was renowned for his many artistic talents and worked as a landscape, portrait and genre painter as well as an illustrator and a Fine Arts teacher. He was a student of Charles Huot and founded with other artists, among which was Frank Carel, the Québec Society of Artists (known today as the Society of Arts, Sciences and Literature).

LeMoine studied for two years at the Anvers Academy of Fine Arts in Belgium. In 1908, he exhibited at the Salon of the Art Association of Montreal, where he stayed for nine years. In 1911, he was commissioned by the Canadian Committee for A Montcalm Memorial Monument in Québec to paint a view of the Anse au Foulon, formerly known as the Anse de Wolfe. During a second trip in Europe in 1913, he studied at the Colarossi Academy in Paris.

Back in Québec, he worked as a drawing and painting teacher at the Québec Academy of Fine Arts. He died suddenly in 1922, and a retrospective exhibition of his work was held by the Séminaire de Québec (today Université Laval) on the same year. Approximately 325 of his pieces are part of the Québec National Museum of Fine Arts collection and numerous others can be found in the collection of the Ottawa Museum of Fine Arts.