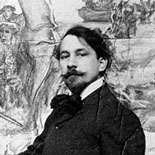 Marc-Aurèle de Foy Suzor-Coté (1869-1937) is a painter and sculptor born in the village of Arthabaska, Québec.

Gifted with a baritone voice, he first started his career as a singer. However, it is painting which truly called to him. At the age of 22, he left Canada to go study at the Academy of Fine Arts in Paris. Since his beginnings we could perceive his free touch and his distinctive colours. We could also see he was inspired by impressionism. In 1900, at the Salon de la société des artistes français and at the Exposition Universelle of Paris, he started getting international recognition as a talented artist.

He came back to Canada in 1907 when he was 38, wanting to paint his country. Thanks to the contacts his family had with Canadian Prime Minister Sir Wilfrid Laurier, he obtained his first painting contracts which were the starting point of a brilliant career. He was renowned as a multitalented artist. He painted portraits, landscapes, history painting and nudes and also did sculpture. However, his favourite subject was always landscapes, especially those of his native region. His art is recognisable for the use of a strong lighting and a palette that tends towards pastel colours. In 1916, he was chosen to illustrate the first edition of Louis Hémond’s novel Marie Chapdeleine.

In 1927, suffering from paralysis, he was forced to quit painting. He moved to Daytona Beach, Florida, where he spent his final nine years.

He left behind an abundant production of which we can find pieces in the Fine Art Museums of Québec and Canada.