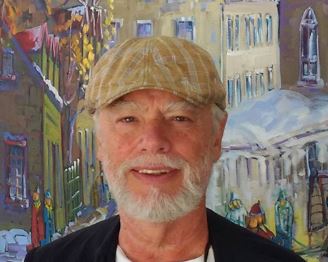 Born February 25, 1950, Normand Boisvert is the only boy of a family of 9 children. His parents were fruits and vegetable sellers at the local market. The family lived in the working-class neighborhood of Trois-Rivières, a small industrial town from the French province of Quebec in Canada.

For the young Normand, school was a boring place that brought him to draw portraits during his classes. At the age of 15, he left school to go work with his father. He kept drawing portraits as well as comic books while working different jobs to survive. He dreamt of an artistic career, so he registered and the Trois-Rivière college to learn to paint. But the art taught there did not touch the young Boisvert’ artistic approach. After his first year, he left school.

His father had a local attached to the house and he suggested that Normand installed his studio-room there. It was his first studio at the age of 17. He stayed there for two years, selling his drawing and paintings for $5 and $15, allowing him to provide for himself. He produced art with such enthusiasm and discipline. It was at that time that he discovered regional artists such as Léo Ayotte and Raymond Lasnier.

At 19, to improve his lot, he worked in a rotisserie and, by chance, an empty room was next to it. He moved in this room which had a bedroom and kitchen corner, as well as a big window to exhibit his art. He worked relentlessly but was still seeking answers to his artist’s anxieties. He then registered, in September of 1971, at Quebec’s University of Trois-Rivière in visual arts. He quickly understood, after the first class, that it was not the path he had hoped for.

At the same time, he exhibited his work at the Cultural Center of his town and found great success there. The local press praised him. He had more and more success selling his art and left the University after a brief stint.

Boisvert then started giving painting lessons. He was only teaching what he knew, having no college or university diploma and having taught himself. He had much success and continued teaching for the next 10 years. The income generated by the painting lessons gave him some financial stability.

He exhibited more and more in shopping centers and at various events and made himself known to the public through radio, television and newspapers. From 1972 to 1974, he did a series of painting classes for a local television network.

At the beginning of the 80’s, he was asked to preside over cultural events by several regional organizations. His exhibits were multiplying quickly, the peak of which was undoubtedly the launch of his book " Normand Boisvert, Un peintre en Mauricie : peintures de l’artiste" (1980), accompanied by a solo exhibition at the Shawinigan Cultural Center.