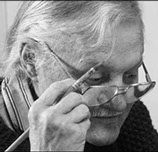 Normand Hudon studied at the Querbes Academy in Montreal in 1943 and then studied at the Saint-Viateur school from 1944 to 1946. He was admitted at the Montreal School of Fine arts in 1947, where he stayed for a year. In 1949, he was taught fine arts at the Académie de Montmartre in Paris.

Before being a painter, Hudon started his career as an actor. He had always been a caricaturist, and he decided one day to follow this passion to become a painter. His paintings follow in the artist’s footsteps as a caricaturist, which gives them a playful and comic aspect.

His characters, be they lawyers, judges, nuns, clerics or children, always invite us to follow them in their universe of a not so long past Québec, full of memories. The history that is brought to us through Hudon’s works tell anecdotes of the everyday life, without any flashiness. Transparency and flow characterise his paintings.